It’s not a secret that many of us have celebrity crushes. Sometimes we even fantasize about being married to one. Even though to some of us it might seem unimaginable to even cross paths with them, to celebrities, this is quite more believable and doable. There are a lot of celebrities who have been lucky enough not only to meet but also to tie the knot with their celebrity crush, making their dreams come true.

Today we at Anomalous brought you a list of celebrities who ended up marrying their celebrity crush.

Mila Kunis had her first-ever real kiss with Ashton Kutcher on That ‘70s Show when she was 14 years old. Even though she had a crush on Kutcher, it took them more than a decade to get together as a couple. In 2015, Kunis ended up marrying her first kiss, and now they have 2 kids together.

Josh had a crush on his now ex-wife, Fergie before they even met. He played the spontaneous card and asked the producer to invite Fergie with her band, TheBlack Eyed Peas, to be guests at his show in Las Vegas. They started dating as his plan worked. The couple got married in 2009 and in 2013 they welcomed their son, Axl. Unfortunately, they separated 4 years later

Kanye had his eye on Kim way before they started dating. Kanye revealed that he had a crush on Kardashian ever since he saw a photo of her with Paris Hilton in 2006. The couple started dating in 2012, but at the time, Kardashian was still married to her now ex-husband, NBA player Kris Humphries. After finalizing the divorce in 2013, Kim and Kanye got engaged in the same year.

Wiz Khalifa was also drawn to Amber Rose before they started dating, and he didn’t hide it. In an interview, Khalifa was asked if there was one girl in the world that he would like to be with, his answer was “Amber Rose” Rose didn’t stay indifferent, she hit him with a message on Twitter. They fell in love and got married in 2013. But their marriage didn’t last long and they divorced a year later.

Lisa was literally Jason Momoa’s childhood crush. When Momoa was 8 years old, he watched The Cosby Show and when he saw his now-wife, Bonet, on TV, he recalled saying,

“Mommy, I want that one.”Momoa’s wish came true in 2005 when the couple started dating. They got married in 2017 and have 2 children together.

Jackie Titone and her soulmate, Adam Sandler, are on the set of one of his most popular movies, Big Daddy. Even though Titone was cast for a small role as a bartender, she and Sandler had time to bond on the set and they soon started dating.

They have been happily married since 2003 and they share 2 daughters together.

In an interview in 2014, Joe Manganiello was asked what physical qualities he’s attracted to. He simply answered “Sofia Vergara, that’s it”

Carmelo Anthony had a crush on La la. A mutual friend of his has introduced them. After meeting their relationship started as a friendship and later evolved into something more. They got married in 2019 and they share a son together.

Kelly Preston revealed that when she was 16 years old, she saw a poster of John Travolta as she was walking out of a theatre and had sort of a flash, knowing that someday she’d be with him. She recalled that after seeing the poster, she said, “I am going to marry that man,” and eventually she did. After meeting in 1987, they tied the knot in 1991 and were together for 29 years until Kelli died in 2020.

Who was your childhood celebrity crush? If you had the chance, would you marry them now? 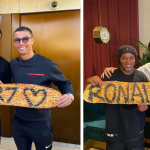