Therefore we decided to share some photos of the girl with you. We hope you will enjoy them.

Stoprain Wang, the dad of this girl proudly shared photos of her daughter’s headless Halloween costume.

The pictures are of her daughter with a dotted white and black dress soaked with blood. She is holding her own in a bloodied napkin in the costume. The costume itself was a lot scary and a lot of kids were terrified after seeing it.

However, the dress was designed in a way for her to collect candy, even though it didn’t look like that. The place where her head should be has an entrance named “candy entrance” which you can use to add candy inside.

It’s not just about the style of this Halloween costume, this is also a substance.

As you can see in the video, the little girl was lucky enough to collect lots of candies. A lot of people were shoving their hands by putting candies down the neck of the costume. You can call it the easiest candy collection ever!

Her dad said that:

“The biggest challenge was making the headless model’s body look real, be balanced and not too heavy for my daughter. My wife tried to use steel wire and cotton for the body, but both of these materials didn’t work well. Finally, she decided to use hardened paper to create the body’s shape and it looks better. Also, since it’s a little stuffy when wearing the costume, my daughter can’t wear it for a long time.”

The costume comes without a head. You can see the girl holding her head with the hands of the costume

Wang shared photos of her daughter on his Facebook and he also explained that his wife was the one behind the costume.

“Some children were scared of my daughter in the costume and even ran away when taking pictures with her. Besides that, people thought it’s creepy, but creative because of the design of the ‘Candy Entrance’ at the neck,” elaborated Wang.

“Every year Anita’s work is amazing, and this year the effect is even more amazing! Starting to look forward to Halloween next year.” Wang was especially proud of how well his daughter kept up the act of a horrifying girl—some kids were afraid to get close to her!

“Her little backpack was full of candy. The sweetest thing, however, was that she separated the candy into several piles and shared them with her brother, grandmother, uncle, aunt, and cousin, and only kept a small part of the candy for herself. She’s really a sweet and lovely little girl” said her dad.

The post even got more than 1.8 million views over the internet and it was even presented in a number of social media outlets.

People were throwing candies inside the girl’s costume

What do you think about this costume? What are you planning to wear this Halloween?

The FB pictures of the girl gained over 17,000 shares and the video itself got more than 1.8 million views. 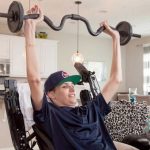 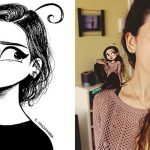