“I’m not surprised to hear that it’s yet another movie fetishizing female pain, even in death.”

Emily Ratajkowski weighed in on surrounding the Netflix movie blonde and reacted to a commenter who dubbed her a “fake feminist.

The Marilyn Monroe movie has been the subject of criticism for filming Marilyn’s death scene where the real-life Marilyn died, depicting a fictional sexual assault scene with JFK. It also shows a CGI-talking fetus asking not to be hurt – That’s not even touching the controversy surrounding the director’s comments even before the movie was released.

Emily began in a new TikTok,  I’ve been hearing a lot about this Marilyn Monroe movie Blonde, which I haven’t seen yet, but I’m not surprised to hear that it’s yet another movie fetishizing female pain, even in death.”

best show of my life. we love you🫶 @badbunny @babsjeannek

“I think as women, I mean I can say for myself for sure that I’ve learned how to fetishize my own pain and my own hurt in life, so that it feels like something that can be tended to, that’s kinda sexy, and like, you know: ‘I’m like this, oh, fucked up girl, whatever.'”

She then responded to one comment that read, “‘Blurred LInes’ was terrible for feminism, so her feminist take feels very fake” by lip-synching to the Lana Del Rey song “Ride” – specifically, the line that goes “I’m tired of feeling like I’m fucking crazy.”

“READ MY BOOK and stop telling women they’re fake feminists ITS INSANE,” Emily added in her caption, referencing her book of essays My Body.

What do you think about Emily? Is she right? We would love to hear your answers in the comments down below. 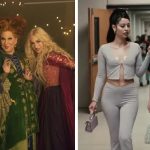