It is believed that blondes could only be found among Caucasians. So how do the Melanesians who are mostly located east of Papua New Guinea in Oceania have the striking contrast of the darkest skin in the world outside of Africa and blonde hair? The question has baffled many people and scientists for years.

For many years Blond hair was attributed to Caucasians. However, the Melanesians of the Solomon Islands are among the few groups with blonde hair outside Europe.

Melanesians are black island people in the south pacific who have migrated more than a few thousands of years back, long before the Africans who came to the Americas as slaves.

The name “Melanesia” has been first used by Jules Dumont d’Urville back in 1832 to denote an ethnic and geographical grouping of islands distinct from Polynesia and Micronesia.

However present evidence from scientists suggests that the linguistic culture, and political fragmentation of Melanesians that prevailed at the time of European arrival, with a half-dozen languages and cultures often represented on a single island, was partly a product of transformation that had occurred during the previous 2000 years.

The Melanesian population of the islands possesses the darkest skin outside of Africa, while 5 and 10 percent have bright blond hair.

There have been several theories on how these people got their blond hair. Genetic heritage from mixed breeding with Americans/ Europeans, high fish intake, and the sun and salt whitening are some of those theories.

A geneticist from Nova Scotia agricultural college in Canada, Sean Myles has conducted a genetic analysis on saliva and hair samples from 1209 Melanesian Solomon Island residents.

He has discovered that the blondes carried two copies of a mutant gene that is present in 26 percent of the island’s population.

These people also have a native TYRP1 gene that is partly responsible for the blond hair and melanin and is distinct from that of Caucasians as it does not exist in their genes. It’s a recessive gene that is more common in children than in adults.

This lead to the theories that black Africans were the first homo sapiens of all races that came out of the black African race.

The people of Melanesia currently speak over 1000 languages, with pidgins and creole languages developing from trade and cultural interaction centuries before European encounters. Even though the main religion of Melanesia is Christianity, there are also people who still practice their native religions such as the belief in a variety of spirits that inhabit the forests, mountains, and swamps.

Just like the rest of the world, Melanesia has also faced social problems such as alcoholism, crime, malaria, and AIDS.

In spite of these challenges, the region is a paradise to many people with an exotic history and culture. It is also a place with the happiest and friendliest people in the world.

What do you think about this civilization? Would you like to have a visit to this island? 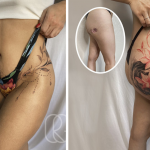