According to studies done by a psychologist, tattoos are more than just decorative art on our skin. Getting inked can help us to develop our self-esteem, make us feel closer to our bodies, and in cases of memorial tattoos, they can aid us in emotional recovery and growth after trauma. If a single picture paints a thousand words, tattoos can represent a thousand stories.

Today we at Anomalous brought you a collection of 12 photos of celebrities who got inked in honour of their loved ones.

The American singer and songwriter Madonna has six children – her biological kids Lourdes and Rocco, plus her adopted ones named David, Mercy James, and twins Stella and Estere.  Even Though Madonna’s image has always been that of the wild and rebellious type, she didn’t get any tattoos until she was 62 years old.

Madonna shared an Instagram post captioned “inked for the very first time” after getting her first tattoo. The tattoo represents the initial letters of her children’s names marked on her wrist.  She has recently shared a video showing off another tattoo that was made as a tribute for her mom = the word “Maman”, which is French for mother.

Kids always have a permanent place in their parents’ hearts. In the case of John Legend and Chrissy Terigan, they have a permanent place on their parents’ skin too. John’s tattoo represents the names “Chrissy Luna Miles”, and his wifey has the same, but with “John” instead of her name. Unfortunately, the couple lost their third child, Jack. To remember Jack, the model marked his name on her wrist, just above their existing family badge.

The Dark Angel actress looked up to the skies for her tattoo inspiration. Alba designed her arms with constellation patterns of her children’s zodiac signs. In an Instagram post, Alba shared what each symbol represented – Gemini for then 10-year-old Honor, Leo for then 7-year-old Haven, and Capricorn for then 1-year-old Hayes.

Bindi Irwin is the daughter of the Australian crocodile hunter and wildlife icon Steve Iron. She now has a child of her own, whom she named Grace Warrior. Bindi said that the second name of her child was a tribute to her dad’s legacy of being an incredible fighter and advocate for wildlife.

In an Instagram post, she has shared that she inked “Graceful Warrior” in her fathers handwriting, to keep his money with her forever. Bindi has also imprinted an alligator on her skin to represent her pet, Daisy, and her work in wildlife conservation.

The celebrity couple Joe Jonas and Sophie Turner got tattoos in honour of their grandparents before they were married. Turner got a minimalist one of her pinky finger, while Jonas opted for a more elaborate one – he replicated his “PaPa Miller’s” vintage photo, and the resemblance is amazing.

It wasn’t the first time Jonas ‘ brother celebrated their family bond through body art. In 2012, he inked a symbol of intertwined strings, to represent their parents as two ropes  and four ends to represent four brothers.

Sibling bonds are also one of the most special relationships anyone can have. The Oscar-nominated actor didn’t hold back in expressing his love for his younger sister, Beanie Feldstein. Jonah has the phrase “hello, Beanie!” tattooed on his arm.

Jason Momoa has played strong characters like Aquaman and Khal Drogo in Game of Thrones. However, he appears to be a softie when it comes to his children. A shirtless photo of him revealed not just his abs and pectoral muscles, but also what looks like red scribbles on his chest.

This is a tattoo to celebrate his kids with his ex-wife, Lisa Bonet. Jason asked his daughter Lola and His son Nakoa-Wolf to draw their signatures. Later he used their handwritten autographs as a pattern for the tattoo.

Stephen Curry and Ayesha Curry are one of the most loved NBA couples. They took the “Matchy-matchy” to the next level by getting identical drawings etched onto their bodies in honour of their little ones. These geometrical animal symbols held a special meaning for each of their children.

Ayesha shared that their youngest, Canon, will always be their young wolf. As for their two older daughters, they chose a butterfly for Ryan and they picked a unicorn to represent their free and magical firstborn, Riley.

America’s sweetheart Drew Barrymore previously shared the cute little bode art she got for her kids. It’s a tattoo of their names on her wrist. Recently she has upgraded it with what she dubbed as her “lifetime note”, and she did it live on an episode of The Drew Barrymore Show. The new tattoo depicts the quote “Home is where we are”, and she said that the phrase has been her mantra for the last 5 years.

In an emotional behind-the-scenes video, teary Drew Barrymore explained to the audience that she used to live in rental apartments, and she was feeling sad for not living the life she planned for her kids. But that’s when it lso hit her, that home can be anywhere, as long as they are together.

The eldest son of Hollywood’s long standing couples – DAvid and Victoria Beckham recently exchanged “I do’s” with model Nicole Paltz. The couple has already shared their public displays of affection even before their wedding. However, a more permanent declaration of Beckham’s love can be seen through a sizable tattoo on his neck.

The eyes of his neck are assumed to be Pelitza, below it is a text from his former fiances’ love letter.

It reads, “My forever boy, read this anytime you feel anxious. I want you to know how deeply loved you are. You have the kindest heart I’ve ever met, and I hope I never go a day without your love. I think you are so incredible. Just know, we can get through it altogether if you breathe slow and trust. I love you beyond. Love always, Your future wifey.”

Orlando is a proud dad of two kids – his daughter Daisy (with currency fiancee Katy  Perry) and his older son Flynn (with ex-wife Miranda Kerr). Bloom also decided to wear his heart on his sleeve by getting a tattoo of his son’s name on his arm. However, instead of going for the plain spelled out name, he opted to use Morse code (Left photo).

The initial tattoo became a cautionary tale. It also served as an example on why we need to double-check before making something so permanent on our skin. As soon as the actor shared a photo of it, people quickly pointed out that the code was spelled “Flynn” and not “Flynn”. Thanks to the eagle-eyes fans, his tattoo artist was able to correct the error ()right photo).

When Kristen Bell’s hubby appeared on the Ellen DeGeneres Show, the host spotted a tiny emblem on Shepard’s ring finger. When he was asked about it, the comedian admitted that

he isn’t fond of wearing jewelry and jokingly stated that he still felt obliged to warn women that he was taken, so he went for an unconventional wedding band. 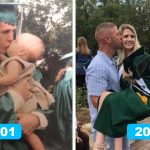 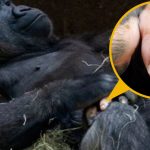