Have you ever wondered how are movies animated? What are the secrets behind spiderman’s superhero abilities? Just think about movies like Avatar. These characters look so real, right? All these things are capable due to the powerful technologies in the world.

Therefore we at Anomalous decided to bright you a collection of behind-the-scenes looks of famous movies and TV shows.

1. The scene of thunderbird on the set of Fantastic Beasts.

2. This is how Josh Brolin was transformed into a digital version of Thanos.

“People just kept coming up and cuddling me like a big bear or rubbing my belly like I was pregnant. Or trying to sit on my lap like I was Santa Claus. I felt like an old man, an old grandpa, with a bunch of kids around,” said Chris. Chris Hemsworth’s fake belly was about 90 pounds in weight.

6. Henry Cavill’s makeup for his character as Geralt in The Witcher 3.

7. Evan Rachel Wood getting some sleep while shooting Westworld.

8. It’s better to be an operator too.

9. Here’s how the avatar is animated.

10. unny pics from the set of The Great!

11. Two actors having chit-chat while shooting for The Hobbit.

In the old days, filmmakers used a lot of techniques using paints and different tools to add special effects. However, with the development of technology most films, these days use green or blue screens, fabric, or paint to create animation scenes. A lot of blockbuster movies use these effects rather than just shooting in real locations.

12. This is Gamora getting a new look for avengers.

13. Dr. Strange’s movie is all about special effects.

14. Ever seen McKellon using a Macbook in The Hobbit?

15. It’s Karen Gillian and Terry Notary in the right picture. They lent their emotions to the character of Buck in Call of the Wild.

16. Thor and Loki are looking like they are getting along. However, someone in the picture looks like he’s upset about it.

17. This is the secret behind the gorgeous horse and the entire scene of “Alice in Wonderland”

19. This is how Samuel L. Jackson gets ready for Captain Marvel.

20. Gal Gadot in her relaxed position while shooting Wonder Woman in 1984.

The development of technology has made it possible to use green screens, amusing costumes with motion capture sensors, and stunt doubles to produce amazing scenes in movies. Don’t forget there are a lot of staff and workers who are working day and night to make these scenes available for the public to enjoy.

What do you think of these behind the scene photos of movies? Did you already know how these animations were made? 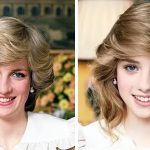 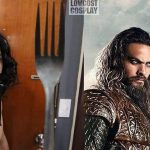